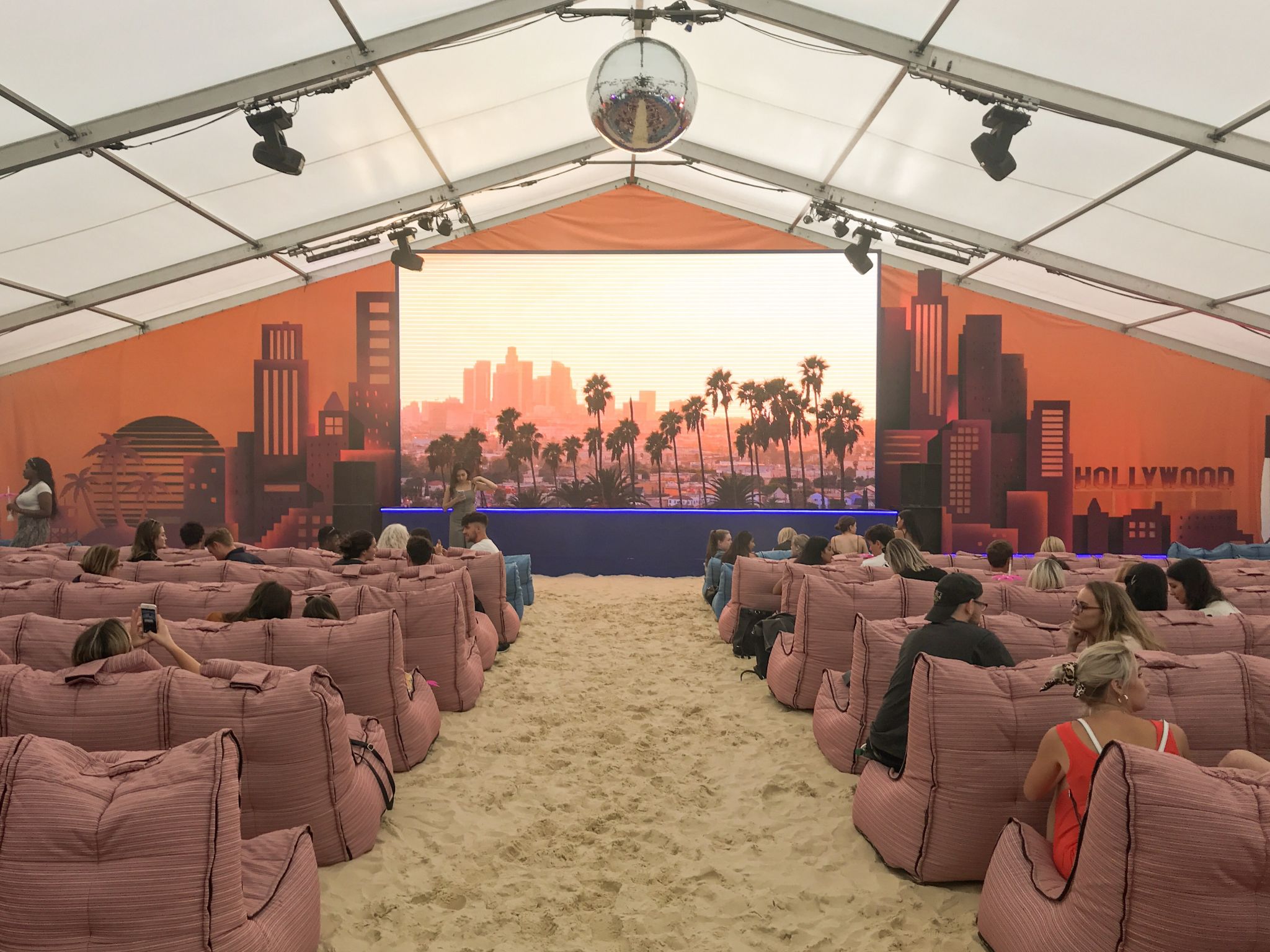 Backyard Cinema is back in London with a new space and a new theme. They’re embracing the heatwave with some California vibes and rocked up in Camden Town with an LA themed cinema. It’s totally rad, tubular and damn right gnarly dudes! The new unique cinema has a grand sun-kissed entrance before you even reach the main venue. Through the Roundhouse being met by friendly Backyard Cinema staff, you are pointed in the direction of a California setting and music from the best bands from SoCal. The cinema brings all the LA beach vibes. Sand floor, pastel-coloured comfy seats, cocktails at the bar and delicious ice cream. There is a roof to keep you safe from the UK rain, decorated with palm leaves and a disco ball. The friendly staff are on and again to help you with your seats or show you to the bar. I chose the bar first, obviously.

There are 2 cocktails on offer in palm tree designed vessels including a Mai Tai or a Passion fruit Martini. There are also soft drinks, wine, beer and spirits also available to quench your first before the film begins. The ice cream on offer is by Dappa and is dairy-free. It’s blended from almonds and cashews but you still get all the creamy goodness normal ice cream has to offer. A devilish trick which tastes like the real thing but also topped with incredible toppings and comes in a variety of flavours. What is this sorcery? Before the film starts, in true Backyard cinema-style instead of trailers you’ll be treated to a cleverly crafted remixed video of songs that fit the bill, including songs from movies which are available to watch this summer.

“It was so good, I almost peed my pants!”

Backyard Cinema has a great collection of films for you to watch this summer including Sing-a-long screenings which I love and highly recommend. Which of these films would you like to watch:

Backyard Cinema has now got a new home in Wandsworth and moves in soon with a brand new theme! Make sure you’re following them to keep up to date with the latest cinema, films and events. It won’t be long till Christmas and their Winter event is not to be missed. It’s magical every year and I expect this year to be bigger and better than ever.

WHICH FILM WOULD YOU LIKE TO WATCH AT BACKYARD CINEMA? LET ME KNOW IN THE COMMENTS BELOW.

Disclaimer: I was given complimentary tickets to the Press event in exchange for content. As always all words, opinions, photos and dyslexic spelling errors are my own.