On Monday, Kentucky Tourism invited me to the Premiere Screening of Kingsman 2: The Golden Circle at 20th Century Fox in London! Before heading down to the screening, we took a cheeky stop by Leicester Square to see the stars walk on the red carpet. All the stars turned up for the event, including Taron Egerton, Julianne Moore, Colin Firth, Channing Tatum, Halle Berry and even JB the Pug who looked dapper in his doggy suit. I must say there was a lot of screaming when Channing Tatum got out the Black Cab. What a great event and I loved the Orange carpet! 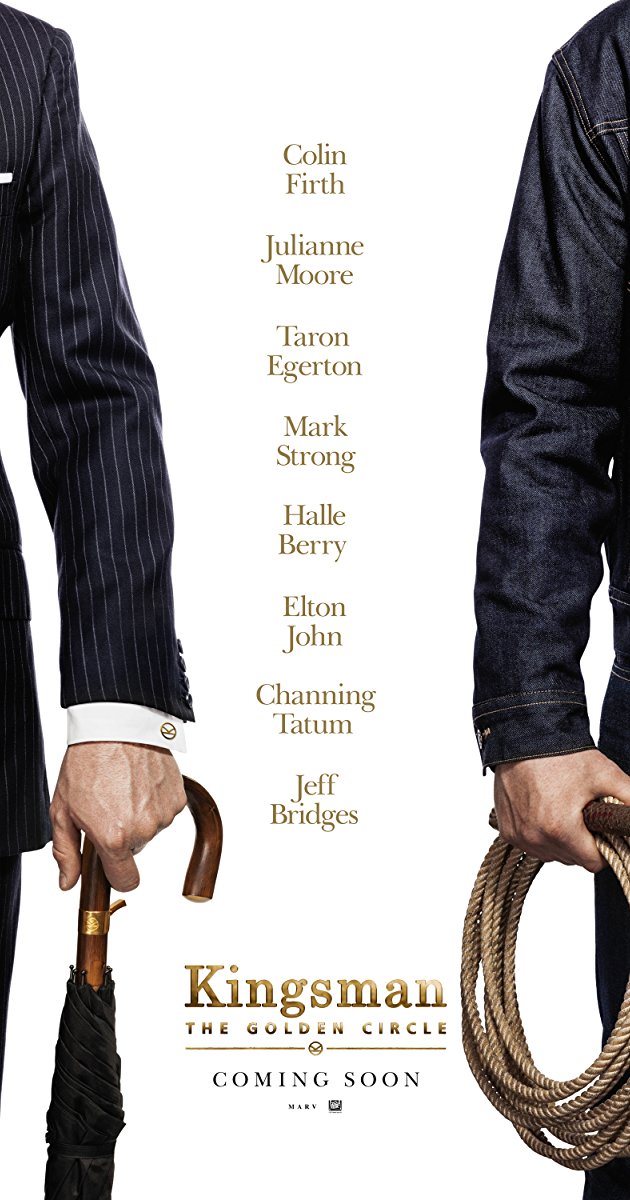 I loved the first movie which took on a different and more modern day take on British Spy movies. I was so excited to watch this sequel but did it deliver? I really enjoyed the film but parts of the film left me…disappointed? Let me explain!

“IT’S NOT THAT KIND OF MOVIE!”

Not only do we have some beautiful men to look at but they are looking pretty sharp in this film. I’m talking about you…Taron and Channing. Damn! These guys have prefect jawlines which would look amazing on my future children. Just saying! Then, give them a suit! *jaw drops* The only downside is that Channing isn’t in is enough but we do see him in a suit! Crikey! One of the best parts of the original movie is the action sequences. Matthew Vaughn style is outstanding. I love the quick action scenes, camera turns and so smooth that it looks like it’s shot in one take. They are incredible and makes our spy’s look even more bad-ass than they did before! Ok, nothing will ever top Bond! But as far as spy movie go, this is one of my favouites. To be honest I can think of a few Bond movies where Kingsman was actually better. Quantum of Solace! You know I’m right about that one! So bad! Anyway, Kingsman, competes with the Bond movies with a more modern audiences. Fun for “most” of the family! Julienne Moore, plays Poppy the Villain for this movie. Valentine from the first film was more entertaining in my opinion but Poppy plays more of a visibly mentally unstable villain role. Poppy has a great opening scene which I won’t spoil for you and left me slightly sick to my stomach. However, I really missed the humor side to the enemy character which Samuel L Jackson brought to the last movie. One of my favourite countries in the world. Yes, bringing Americans into a British film is risky but the Statemen tie in quick well to the plot of the story and the history of the franchise. I know a lot of people didn’t like this but imagine if they were set in New York or Miami….or San Fran! No, it’s in the middle of the country with cowboys. EXCELLENT! Guns and lassos in replace of umbrellas and cufflinks. Their cover-up is also pretty believable as a Whiskey factory. Now, it’s starting to look like a proper spy movie. In the original film they primarily stayed in London and a short stop at the church in America. This time round we do a bit of Globetrotting whilst Eggsy tries to save the world. The movie starts in the UK, then goes to the USA, Cambodia and Italy. Let’s not forget a cheeky stop in Glastonbury too. Not a country but feels like another world and I just had to mention this scene somewhere because it’s just hilarious! This sequel brings numberous Award winning actors and artists together. Bringing out the big guns! We’ve got BAFTA winner Michael Gambon aka Dumberdore himself. Academy Award and Golden Globe winning Julianne Moore, Jeff Bridges, Colin Firth and Halle Berry. Multi Award winning and Musical legend Elton John. That’s a lot of awards! The talent is there but arguably their roles weren’t used to the best. Colin Firth was much better in the last movie. The rest were very minimal roles and I was quite disappointed not to see more of them. Elton John, however, was a complete shock. Hilarious! But deemed slightly unnecessary but still a lot of fun and quite hilarious at time. After this event, I was lucky enough to win a Bottle of the Old Forester Statesman Bourbon which features in the movie. The movie is  set in Kentucky and they LOVE their Bourbon Whiskey! If you’re over 18 (or whatever your country’s legal drinking age is), you can order your bottle of Statesman by clicking the link below. Drink responsibly. Not an ad. Just liked the Whiskey! Thank you Kentucky Tourism! What an amazing event and a good movie! I can’t wait to crack open this bottle of Statesman soon. To think I used to be a Vodka girl? Now, all I need to do is cross Kentucky off my list (23/50 states so far). Cowboys and Whiskey! Sounds like my sort of town.

Out in Cinemas NOW!

Are you excited to see Kingsman 2 this weekend? What did you think of the last film? Let me know in the comments below!