Last Saturday, I attended the Fright Fest Premiere of Eat Local at the Prince Charles Cinema in Leicester Square, London. This is Jason Flemyng‘s directing debut. Not only only did I watch the film but I also got to attend the Director’s Q&A at the Groucho Club in their private suite. I’ve been lucky enough to attend a few media screenings over the past year but this was one of my favourites. I met some other bloggers and media influences at the Q&A. I even got to speak to Jason Flemyng himself and Annette Crosbie who are both lovely people. Thank you to Kylie at Daisy Chain for inviting me! Now….Let’s talk about this movie! Jason Flemyng and Annette Crosbie at the Director Q&A So what is the film about? In a nutshell, it’s a vampire comedy. Bare with me! Yes, it sounds ridiculous and when I watched the trailer, I was thinking “What is this rubbish!?” BUT….there’s a few points that made me want to give it a fair chance. Firstly, the director is Jason Flemyng. Yes! That Jason Flemyng from Lock, Stock and Two Smoking Barrels, Snatch and Layer Cake. Basically, all the films my ex’s love! But he’s also in some of my favourite movies like, Stardust, The Social Network, X-Men: First Class and a cheeky performance in Black Mirror. Something for everyone! Eat Locals is Flemyng’s first film as a director and with all these fantastic films under his belt already, there was a lot to be expected of him.

The film starts with eight vampire overlords, who are attending a meeting in a remote farm house. When one overlord is sentenced to a dusty vampire death for breaking the rules, they are looking for someone to take his place. During this meeting, they are rudely interrupted by the British Special Forces. As to be expected, there’s a lot of bloodshed, corpses and action to go with it. What I wasn’t expecting was this film to be as funny as it was. We can only thank the great Danny King (Eddie the Eagle) for this amazing charismatic script. The whole audience, including myself, were laughing from the opening scene to the last words. 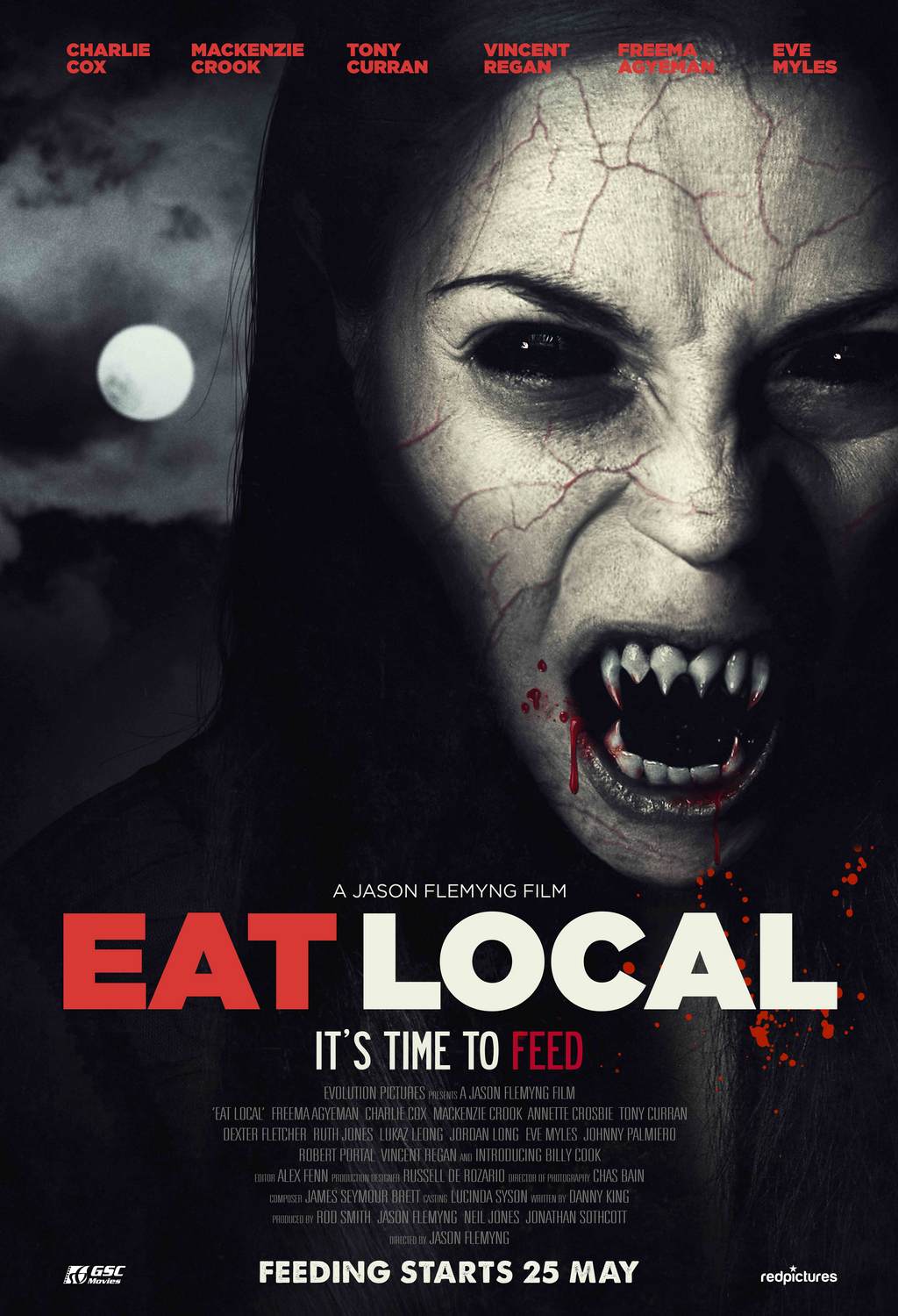 Another reason to give this film a good chance is the cast. It just oozes British Talent! Billy Cook plays Sebastian, who the overlords try to get him to join them and his neck into their teeth. Cook is hilarious and was a great surprise for me. As the film went on, I was loving his character more and more. Next, is the gorgeous Charlie Cox. If you’ve seen my Movie Premiere vlog of this event, you would have heard me saying I was trying to track him down. Unfortunately, he wasn’t at the event  and still currently filming his Netflix series of DareDevil / The Defenders. Cox stars as Henry, the leader of the overlords which also means we get to see a lot of him. Excellent.

Eve Myles stars as Vanessa, equally hilarious, talented and pulls the Vampire look off very well! She was also having an amazing time at the Movie Premiere. I think she was laughing more than anyone and she starred in it. Last but by no means least, Annette Crosbie…the great Annette Crosbie. What a lovely woman! I had a nice little chat with her at the screening, where I told her how much I was looking forward to watching her hold a mini-gun and she was INSANE! Who knew Mrs Meldrew from One Foot in the Grave would look so bad-ass with a mini-gun! What would Victor say?? OK, so the story line is a bit ridiculous but the film is absolutely hilarious which makes up for it. The film has a sketch show feel to it. Like when Kevin and Perry was made into a movie or Shaun of the Dead but vampires and no zombies. No Winchester but a farm house. No baseball bats but Mrs Meldrew with a freaking MACHINE GUN! You get the idea. I would love to rate this film higher but based on it’s comic elements and cast alone I found it impossible. I love a good story and this film just felt highly concentrated on the comedy and rather than making the story slightly believable or any background to the characters. However, as Jason Flemyng’s first directing attempt, it’s not bad and definitely worth a watch with your friends.

Eat Locals is OUT NOW!

Don’t forget to check out my Behind the Scene’s vlog of the event: