I’m back from my recent TrekAmerica trip to Canada on the Glaciers + Grizzlies tour! One of the main reasons I wanted to go to Canada was because I wanted to see bears up close. Not too close but close enough! I LOVE animals so this was the perfect trip to see some amazing animals in the wild that I wouldn’t normally see unless I went to the zoo and let’s face it, it’s not the same! There’s also nothing better than seeing animals in their natural habitat. I also wanted to see a Moose and Whales but if you saw my Instagram takeover with TrekAmerica…I came up short. I didn’t see either. However, I did see bears! Not one bear or two. My group saw a total of 22 bears between us! We became pros at spotting bears. So I thought I would share some Bear spotting tips with you, so you can be lucky on the bear hunt with TrekAmerica this summer! There are some long drives on this trip but these are also excellent bear spotting opportunities. The tour leaders do there best to stop if possible so you can have a good look at bears if you see them but if it’s too dangerous to stop then they go past them. Bears can be like a shooting stars! If you’re not looking then you’ll miss them. They will try to turn around but the bear could have scampered back into the wilderness and you’ve missed your shot. So keep those eyes pealed and don’t sleep on the bus! If everyone is looking out for bears then that just increases your chances. 13 pair of eyes on the trees is better than 1 or 2. The more of you looking out for them, the more likely one of you will spot one. We not only kept a count on our tour but we also let whoever spotted it got to name the bear. The names were pretty hilarious! It’s harder to decide who spotted it first when they are just wandering in the middle of the road and stopping traffic. Cheeky bear! LOOK AT THE TREE LINE

When bears are not blocking the road, they are in the woods. We found a lot of bears walking the tree line. They might be looking for food or human trash littered at the side of the road but Canada is famously one of the cleanest countries in the world. Maybe the bears didn’t get the message or they are just cleaning up after any tourist who are littering this beautiful country. CARS AT THE SIDE OF THE ROAD

Remember, you’re tour group isn’t the only ones on the road looking for bears. Look out for cars on the side of the road as they might have done all the hard work for you! Sometimes, you might see people getting out of their cars to get a closer look or to take photos. Never get out of the vehicle! Bears can easily feel threatened and especially if there is a mother bear with their cub. You’re tour leader will give you lots of information about bears before you enter bear country. Listen to them and have your cameras ready! We found 2 bears at rest stops during the trek. They we’re obviously trying to find scraps left behind from tourists and snooping around bins/trash cans. You’ll find Canada is very well prepared for bears and have the most secured trash cans I have ever seen. There’s no getting into those bad boys but they do scout the outskirts of rest stops of any hidden treasures. So while you are getting your snacks for the drive, take a look around before you leave. Bears leave clues….GIANT CLUES. You’ll know if a bear has been in the area by the stinky mess they leave behind. If you see any large clues on the side of the road then you know there was one in the area just before you got there. They also like to leave scratch marks on trees to mark their territory. While you are hiking the trails and enjoying the beautiful scenery, have a look at the trees. You might find some clues. If you’re lucky you might spot more than one bear at the same time. We saw a family of Grizzly Bears at the side of the road. 1 momma bear and 2 (apparently 3 but we didn’t spot the 3rd) cubs. We also saw a few Black bears which had a friend with them. If you do spot a bear, check around to see if you can see a 2nd or 3rd close by. 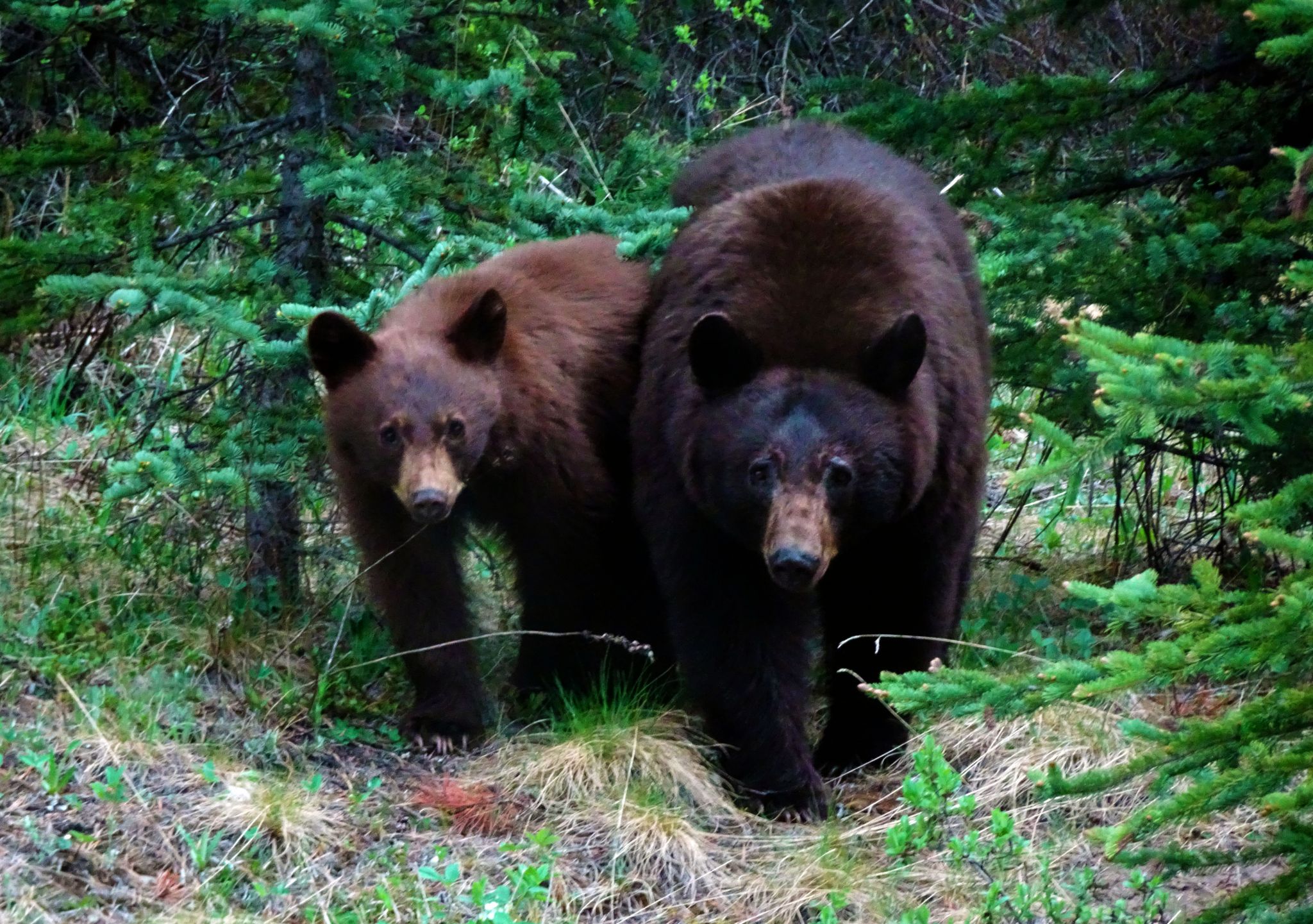 So, where exactly can you see bears and which TrekAmerica trips are you more likely to see them? Well, bears are more common in the summer after the winter months when they hibernate. So, June to September is the best time and higher chances during salmon spawning season from late August to September. Bears can be found in Canada, with higher chances in the Rockies. The majority of the bear’s we saw between Banff and Jasper. You can also spot bears in Yosemite in California and Alaska. TrekAmerica have lots of West coast trips which include this amazing national park so check them out!