Our group had only spent 3 days together and we we’re off to Vegas. If we hadn’t bonded by now, we certainly would in Vegas! This was my third time in Vegas…I love Vegas! It’s not just an amazing party city but the hotels are something to be admired of their own. Everywhere you look there’s bright lights, amazing themed buildings, lots of shopping, great food and outstanding entertainment all down the strip. Let’s go! VEGAS BABY!

We headed to Vegas after breakfast. The drive from San Diego was about 5 hours. We had 1 stop for some lunch but honestly I was asleep for most of the journey so it didn’t bother me. You can see Vegas teasing you from a distance for half an hour before you get there. We drove down the strip and headed to our hotel. We stayed in downtown Vegas, at the north end of the Strip. Personally, I prefer to stay in the middle of the Strip so I have easy access to the hotels. However, I had never been to downtown Vegas so this was a first time experience for me too. Downtown Vegas is the original location of the gambling district this city is so known for. We were staying in the Golden Nugget Hotel which was featured in the James Bond movie “Diamonds are Forever”. It also has a shark tank next to the swimming pool so it looks like your swimming with sharks! It’s located on Fremont Street which is known for its famous light show and you can even Zip line down the street! It’s pretty amazing!

Once we had checked in and we all got ready for a night out in Vegas! We met downstairs in the lobby and Emily drove us to Bally’s Casino on the strip where we had some tea at the Buca Café Italiano restaurant. This is a family style restaurant which I’ve never experienced before either. You order platters which are servings for 4/5 people and share between you all. We had 4 different Italian dishes. No joke, they were HUGE!

Once we had completely stuffed our faces to line our stomachs (and a few cheeky pre-drinks) we were on our way out! However, we were out in style! We had a party bus all to ourselves! This is included in our Trek and we completely took advantage of it. We had control of the music, we brought some alcohol on the bus and poured it into red solo cups. AMERICA! We drove up and down the strip blasting music out the window. We also had a pole at the back of the bus! We had two stops on the bus. The first was at the Bellagio Hotel where we watched the famous Water Fountain show, which you might remember from “Ocean’s Eleven”. We also stopped at the Welcome to Vegas sign! It’s fair to say we all thoroughly enjoyed ourselves on the party bus and was one of my highlights of the trek.

The driver dropped us off at the Encore at the Wynn where we headed to our first club of the evening Surrender Nightclub. There was an amazing pool area where people could drink outside but we mostly stayed on the dance floor. A lot of selfies were taking. I don’t really remember much! We also managed to get to one more club that night which was at the XS night club at the Wynn. Luckily these clubs were in the same hotel. I don’t think we could have made it far! Emily our tour leader managed to get us all in for free (well the girls) and organised the whole night! It was amazing. We all had such a good night and we even saw one of the Jonas Brothers! I can’t remember which one…it all got a bit blurry after that! 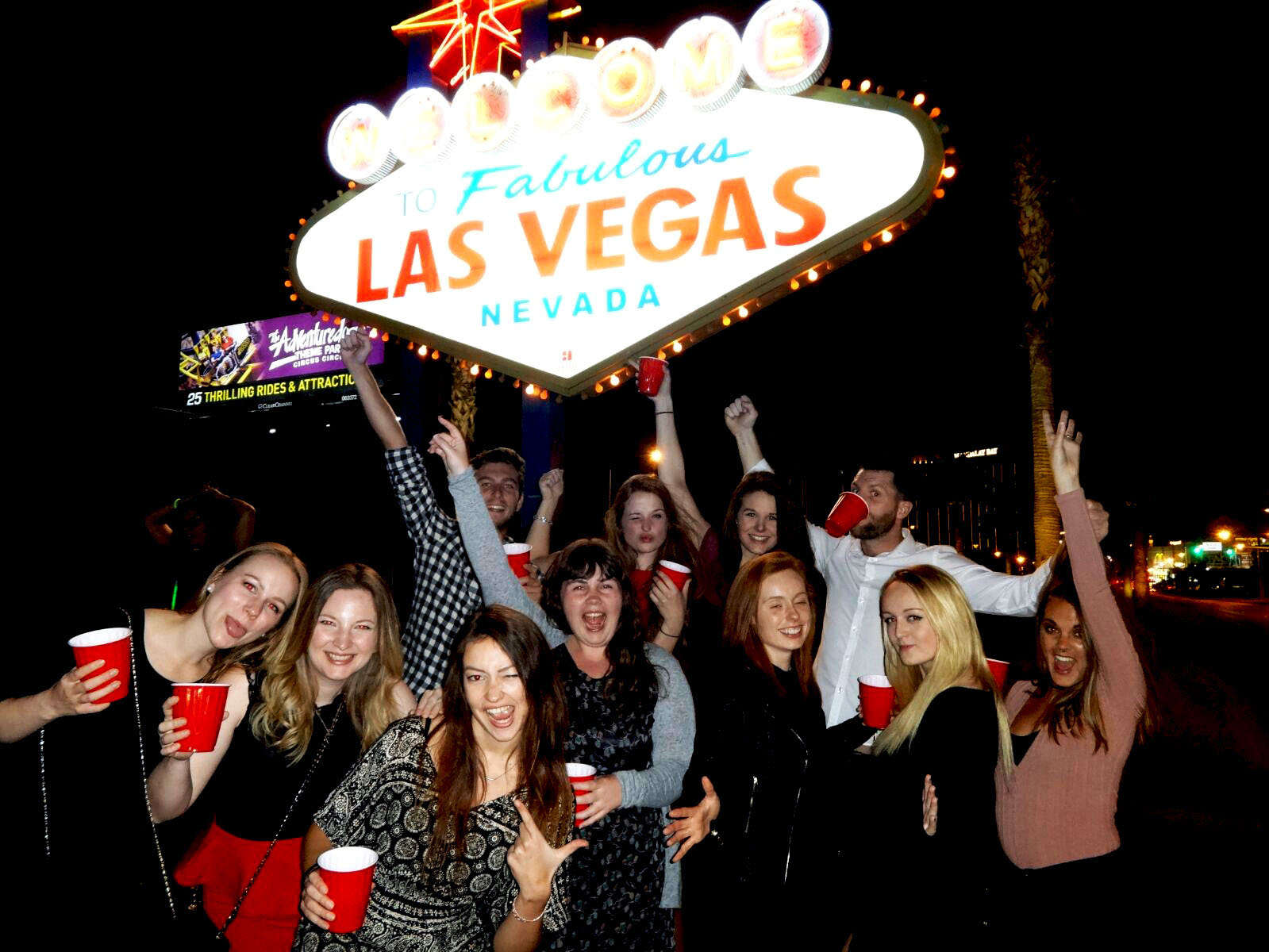 The next day, I was very rough to say the least. I dragged myself out of bed so my roommate Yvonne and I could explore Las Vegas. The second day was our free day. We all stupidly and drunkenly forgot to swap numbers to communicate with each other. We didn’t know where everyone else was in the hotel and where everyone was so we ventured out on our own. We went for an all american breakfast at Denny’s just down Fremont Street which made me a lot more human again. We hailed a cab and took a ride to the strip to have a walk around.

Yvonne had never been to Vegas before so we had a wonder round the hotels and had a look for a show to see later on. Never go into the actual hotels to buy tickets! Always get them on the strip from the ticket booths because they have some great discount offers. We opted for Mystère Cirque du Soleil at Treasure Island. It was seriously amazing! I’ve been to a few shows in Vegas now and this one was my favourite! There are a few Cirque du Soleil shows in Vegas and this one was the cheapest. However, it was such a great show and great value for money! It you are only going to Vegas once, then make sure you get a ticket to this show! 100% worth it!

If you want to see more on my adventures with TrekAmerica on the Southern BLT, please check out my Vegas vlog below: