Now my blog is officially up and running, I really wanted to blog about my recent cross country adventure with TrekAmerica. I picked the Southern BLT trek 2 years ago and I was the second person to book onto the tour. I paid my deposit 6 months before the trek on a sale and then it was just an anxious wait for it to start. I wanted a tour which would land on my birthday as I wanted to make this one very special. America is my favourite country…so far! I am trying to visit all 50 states and after this trek I have now visited 23 states. Nearly half way there. So let’s do this!

I decided to head out to LA 4 days early to explore and sort out my jet lag before the tour began. I flew out with British Airways from Heathrow to LA direct. One of my missions is to get enough points to get into that lounge before the flight. I want my free bacon butty before take-off! The flight itself was 11 hours but I filled my time with back to back movies! I also had a whole row to myself so I was feeling like I was in business class stretching my legs out. When I got to LA it took about 2 hours to get through security and find my luggage. Once I stepped out onto American Soil I found the Super Shuttle outside the airport (they’re dressed in blue, you can’t miss them). I got a shared shuttle bus for $14 to my hostel in Hollywood. That’s very cheap! LA traffic is famous for being pretty shocking but I finally got my hostel about an hour later. The USA hostel is lovely. This was my first experience of being in a hostel. This was the main part of the experience I was dreading. I have watched way too many horror movies about hostels obviously. Seriously though, it was fine! The room was clean, I had my own locker, I was second in the room so I got to choose which bed I wanted and I also picked a small room with just 6 people so we also had our own en-suite bathroom. Stupidly, once I sorted out all my stuff and after 24 hours travelling, I passed out at about 6pm. Big no, no! Usually I try to stay awake till 10pm but I was shattered and didn’t have anything planned anyway so I convinced myself this was a good idea. 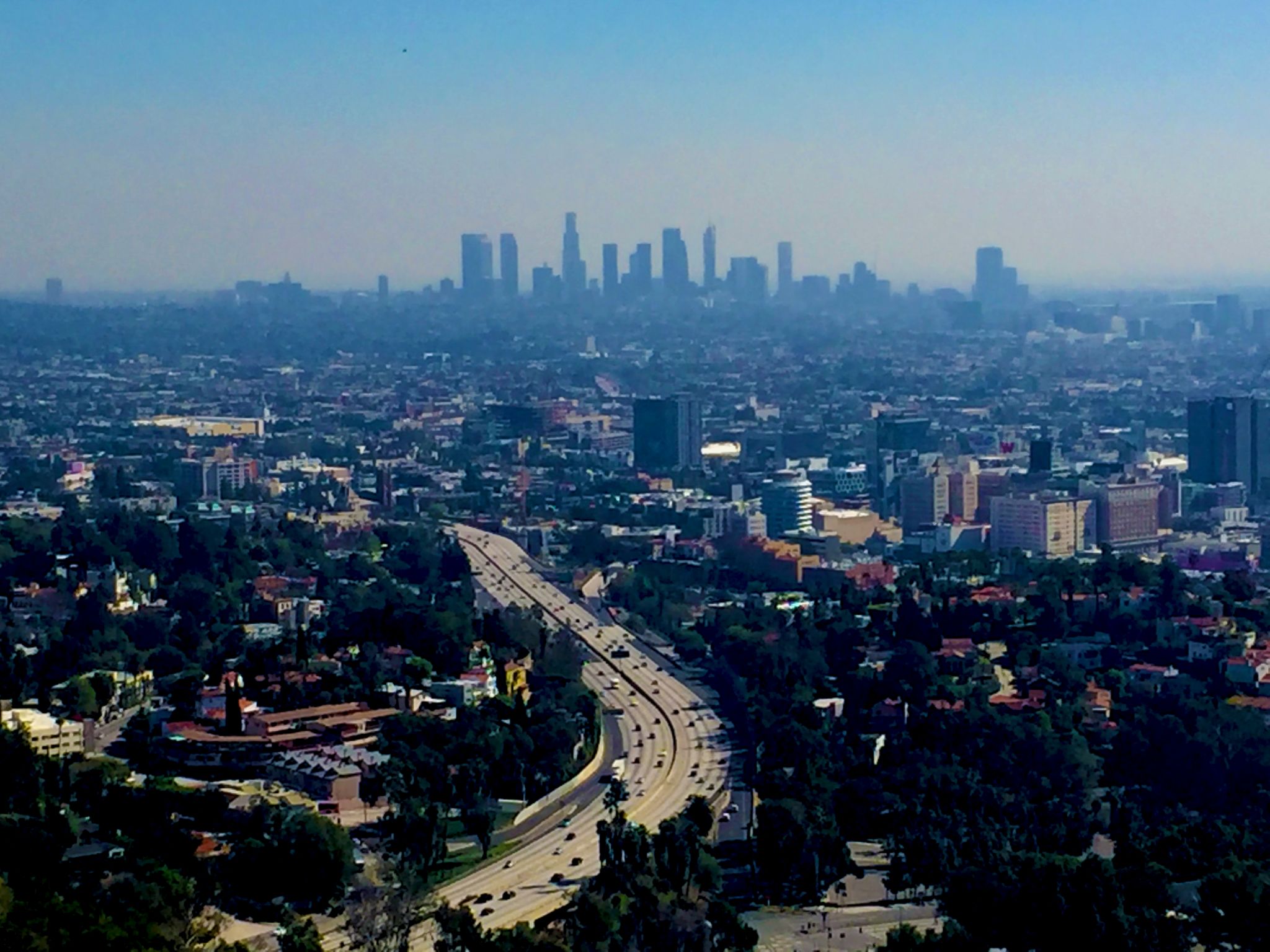 I woke up at 4am…I stayed in my bed till 6am so I wouldn’t wake my roommate. I had a quick shower and was up and out into LA to find the local iHop. I’ve been craving for real American Pancakes for months and it didn’t disappoint! Once I was well fed, I went for a little walk onto Hollywood Boulevard. First stop was the Chinese Theatre, which is well known for having the handprints of celebrities imprinted into the concrete outside. So I went on the hunt for some of my favourite stars, including the cast of Harry Potter and my hero Jennifer Lawrence.

Later, I went on a Stars Homes tour with Hollywoodland tours. This was amazing and I highly recommend it! They firstly took us on this amazing look-out point over LA! We only had about 10-15 minutes here, but that was enough time to take some pictures of that skyline and the Hollywood sign. Next we went to see some of the homes of the rich and famous including, Bruno Mars, Jonny Depp, Colin Farrell and Justin Timberlake. We even went to Leonardo DiCaprio’s house which I took this as an opportunity to shout “Good Luck Leo!” over his gate (this was 1 week prior to the Oscars, I think this helped!). We then cruised down Rodeo Drive and Beverly Hills. The tour guide was amazing, he really knew his stuff which made the tour really fun and interesting. I went back to the hostel and bumped into one of my roommates I met the night before “Izzy” so we both went to Mel’s Diner for some food to try to overcome the jet lag. Izzy had just got off a plane from Australia, so we were both in a bad state trying to stay awake. However, we did really well and even went to the free comedy night put on by the hostel (which wasn’t great but it was free). 11pm! Winner!

The next day was one of my favourite days! I went to Universal Studios in hope that the new Harry Potter World was open. They were test running the new attraction and I was happy to be one of those Guinea pigs. I arrived about 10am and had the whole day to walk around the park. My first stop was obviously Harry Potter World. I went to the wand shop, went on the ride of the Hippogriff but the main attraction was the Hogwarts castle ride. Even if you are not a fan of Harry Potter go on this ride because it was by far the best ride in the park! Once I had my intake of the Wizarding World, I explored the rest of the park which included rides like The Mummy, Transformers and The Simpsons. Unfortunately, the Jurassic Park ride was closed which is one of my favourite rides and one of my favourite movies but it gets you completely soaked! Another amazing attraction at the park is the Studio Tour. I highly recommend you take time to see this as it’s such an interesting tour and explores the sets and props used in the films. I’m a massive film geek and I have degree in TV production so I was like a kid in a candy shop! This tour makes you jump and explores the sets of some iconic movies. Next, I went to the WaterWorld show which is put on by actors from famous US TV shows and stunt men. I went back to Harry Potter World to have dinner at the Three Broomsticks. Proper English scran. I ordered from the kids menu to save money and to get a “normal size portion”…America! I then went to the Stunt and Special effect show which was really interesting and the Animal Actors show which was super cute! I can just barely get my dog at home to sit.

On my last day in LA before I went to the TrekAmerica pre-departure hotel, I went to get one last iHop breakfast. I needed my pancake fix! I then packed all my stuff, checked out of the hostel and ordered a shared Uber to get to the next hotel. It cost about $13 which is super cheap and I only had 2 other people sharing with me who were super nice. Ubers are great in America, super friendly and don’t forget to give them a star rating on your app. I stayed at the Custom hotel however Trek have now changed their LA hotel to the Aloft El Segundo. Trek Hotels are right next to the airport and usually have a free airport transfer if you are coming straight from your flight. I also picked a shared room with another Trekker of the same gender to save me some money and it breaks the ice earlier. They are also really convenient as the next morning the tour meets in the lobby of the hotel, so it’s just a quick stroll downstairs to meet everyone. My Trek roommate hadn’t arrive yet so I chose my bed and got myself ready for the trek. The beach was only about 10 minutes away from the hotel so I booked another Uber and took a ride to Venice beach! Venice beach is my favourite spot in LA. There’s so much going on and you can spend hours wandering the beach front. It’s filled with shops selling art work, jewelry and lots of touristy items. I took a nice casual walk down the beach front, had a little perv at all the lads working out on Muscle beach, the basketball players shooting hoops, the skateboarders at the skate park and down to the volleyball courts. It’s a hard life!

Check out my Top 10 list of things to do and see in LA to plan your next trip to LA!

If you want to see more on my adventures with TrekAmerica on the Southern BLT, please check out my LA vlog below: